During the many lockdowns we had here in Portugal, on one occasion, I was contacted by Joey who was due to get married to his partner, and he wanted me as their photographer, initially, it was for an elopement session prior to their wedding, however, as the conversations proceeded we left it open.

However, with the closing down of many venues, and administrative offices and compounded with travel restrictions we were experiencing through the last 2 years it became clear that the advent of the booking being ever executed was unlikely. From various communications with Joey over the past year I got wind that their registry ceremony was postponed and delayed for many months.

It was a surprise to me to hear from Joey almost a year later wanting to book me. I was delighted to book a discovery call with Joey and understand where they were in their current situation with the wedding and the type of session they wanted to have.

Based on this call, Joey then asked me to quote for their wedding ceremony also, and so we made a double booking and so it went!

As mentioned the original idea was to photograph Joey and Claus as an elopement session, Joey was very clear he wanted it to be at the Moorish Castle in Sintra, and at sunset. The Castelo dos Mouros website informed us that the park closed at 7:30 pm and we booked a 90-minute session, so we scheduled for 6 pm.

As with all client projects I do like to arrive early to scout the location and so I arrived early at 3:30 pm so I could get a good view of the key photo spots, enjoy views and understand the sun’s directions so I could more confidently frame my clients. To this point, everything was going perfectly! 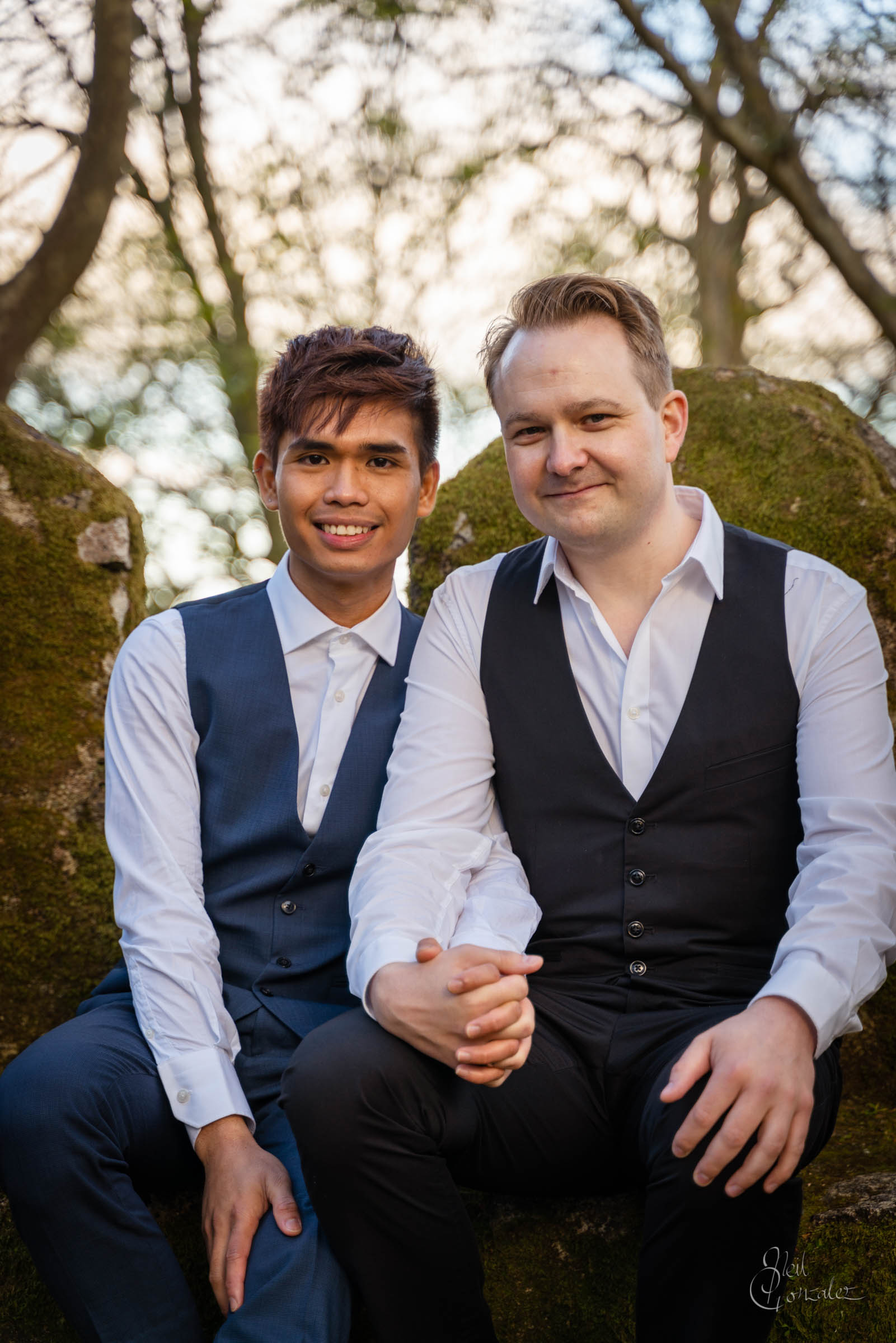 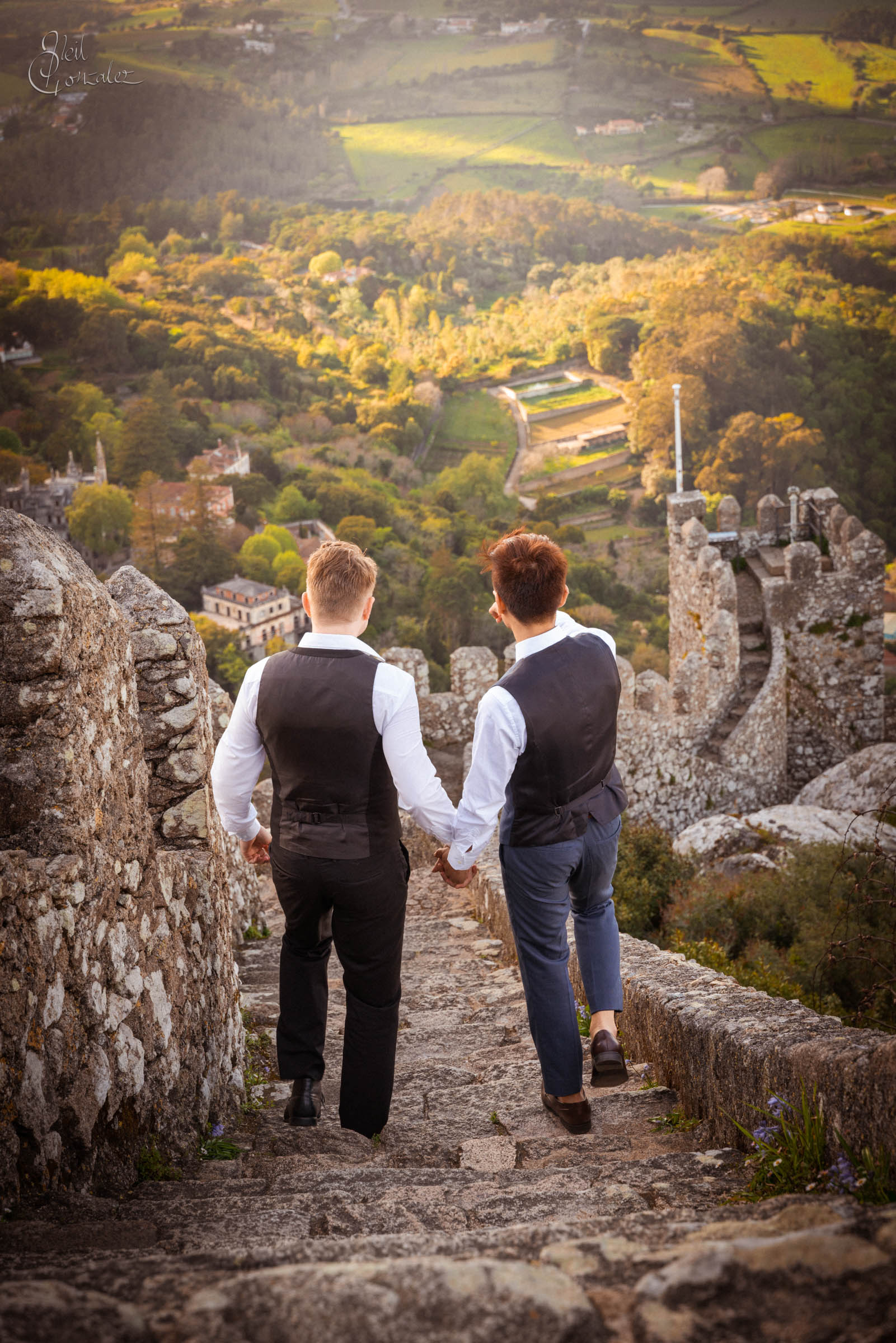 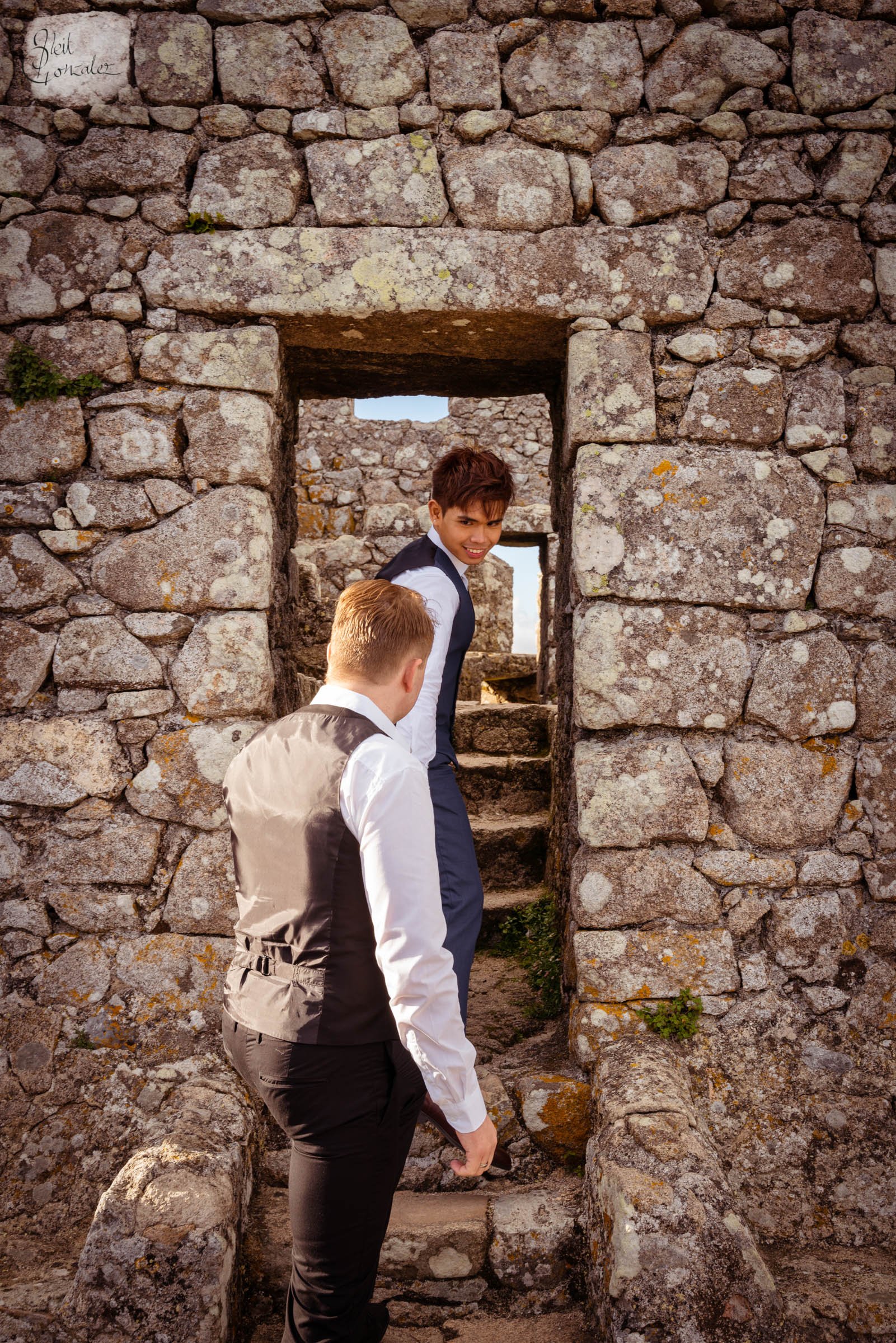 As planned Joey and Claus arrived on time and upon arrival, the doorman informed the couple that the castle closed in 20 minutes, I double-checked and the ticket operator seemed fairly stern about the fact that he was going to be leaving at 6:20 pm regardless. I agreed with the couple that we’d do 20 minutes in the castle and the rest outside. Due diligence, I had already scouted spots outside that would work should we have to work outside already. So, without a moment to lose, we rushed to the furthest locations to try and snap 20 minutes of photos before we had to vacate the castle.

The couple were naturals!

However, as we started heading back to the castle entrance we noticed it was indeed very quiet. It was now 6:30 pm and we hadn’t heard anything anywhere. Our pace hastened as we got to the gates to find they were closed. To our horror, we had been locked inside!

…and Then When Things go Wrong

Numerous phone calls to the helpline (which informed us that they were closed and would re-open the following morning), and then multiple calls to the emergency telephone number which we found obscurely written on a poster near the entrance, where a security guard informed us he was on his way. The first time he was 5 minutes away, when we called 20 minutes later he was 15 minutes away and then a further 20 minutes later he was still 10 minutes away. Suffice to say, our confidence in being rescued by the security guard was diminishing.

With the light now fading, I started looking for ways to climb out of the castle. In my personal life, I’ve been rock climbing for almost 30 years, and while it’s not desirable, I figured it would be better than spending a cold cold night on the top of a hill without warm clothes or any shelter.

While it was possible to climb the couple out of the castle, it was not optimal, and while no clothes were torn or bones were broken, it certainly pushed the fear and anxiety into the experience that ought not to be there, the experience taught me several valuable lessons:

And so, we did get out and everything was fine! The couple actually were happy with the experience and although shaken by the ordeal of climbing out of a castle in a suite bare feet when heights aren’t your thing, they weren’t very much in the mood for any further photographs. Understandably!

I met Joey and Claus at the registry office in Setúbal for their ceremony, which was over and done in 15-20 minutes we then proceeded into the city centre where we took some lovely photographs in the historic centre. 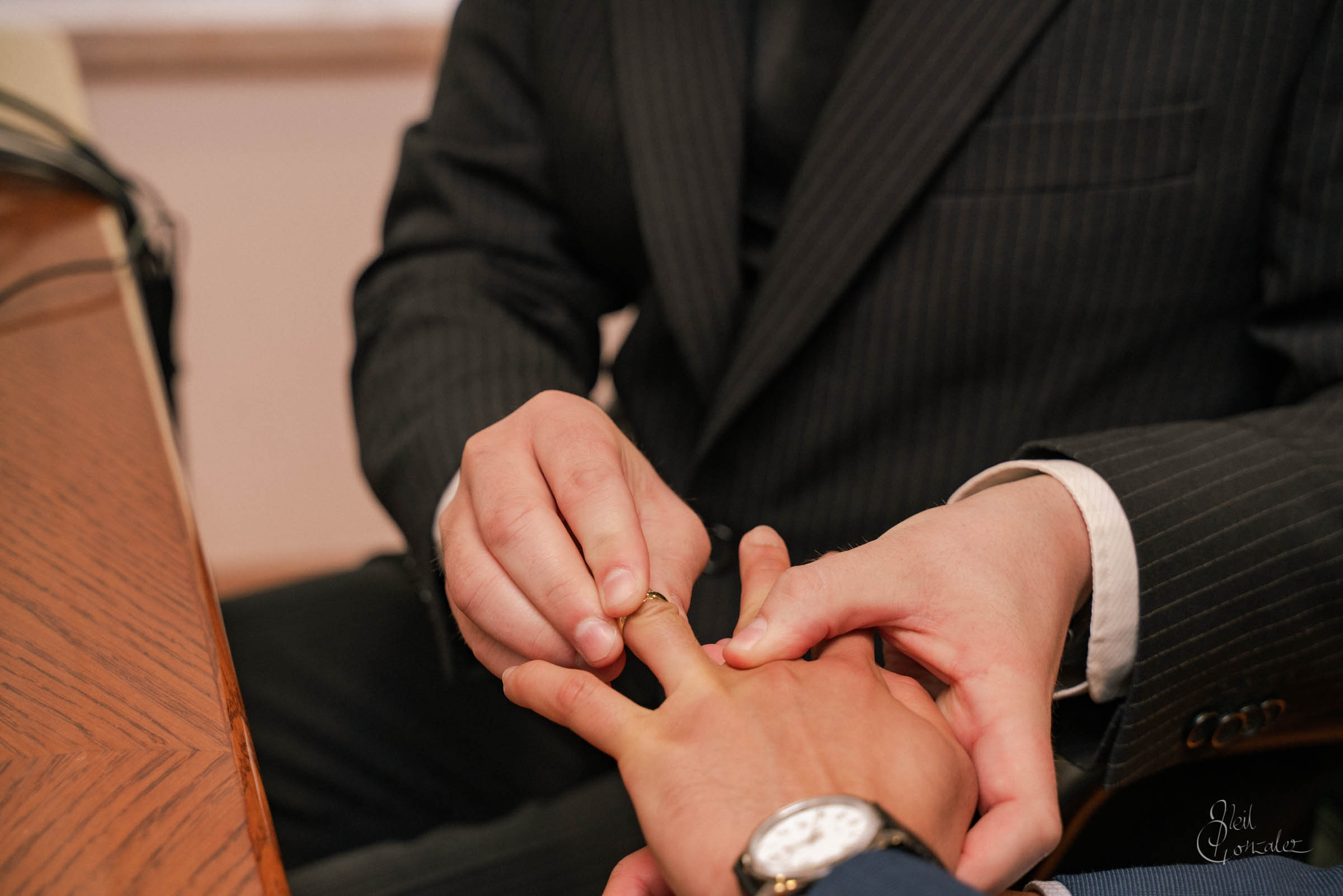 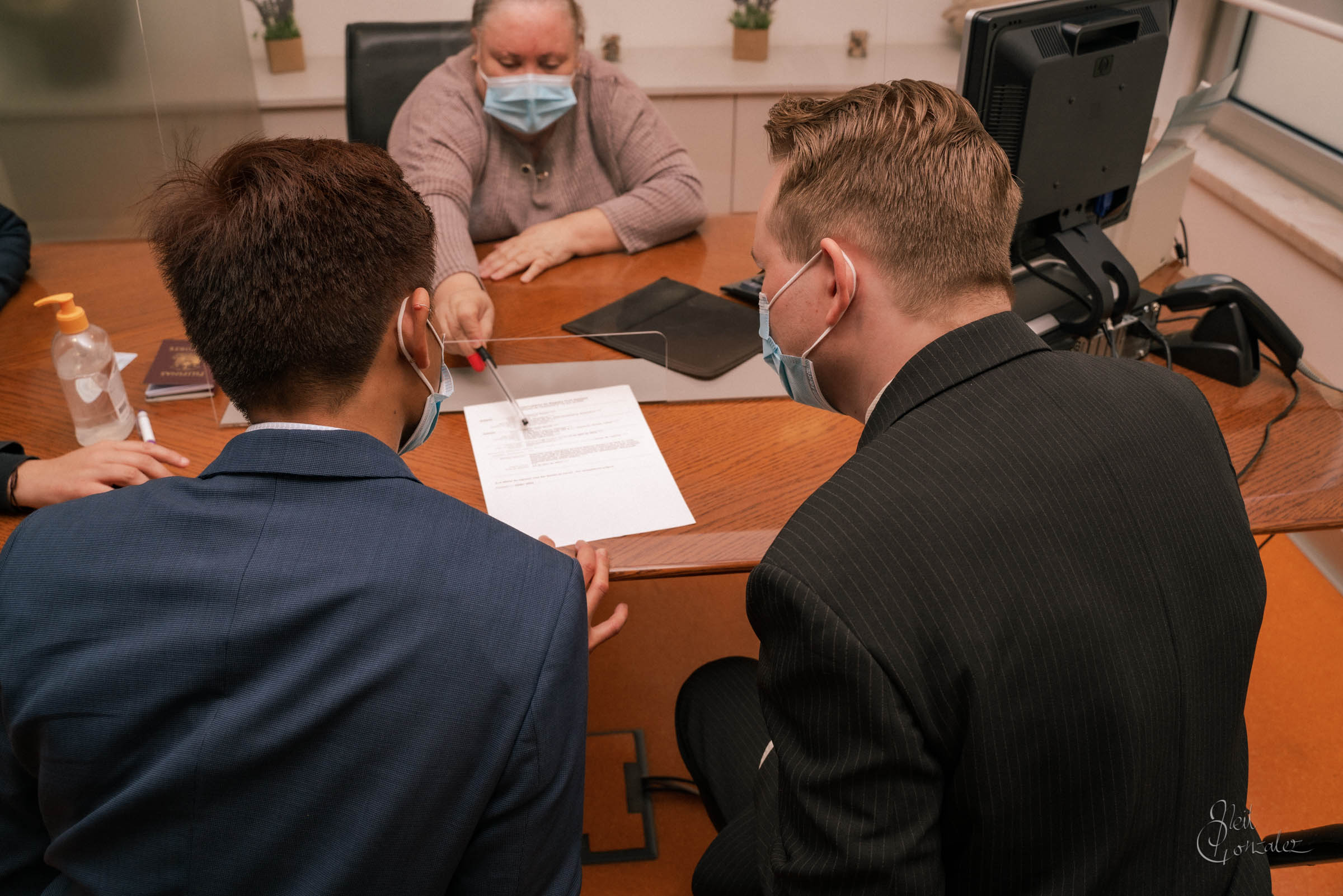 Setúbal has many hidden gems, for example, the Miradouro Sao Sebastiao Setubal just popped up for us as we looked for a space to park.

Setúbal is a city approximately an hour south of Lisbon by car, offering some great gastronomy from fresh-caught fish and some of the spoils that the Alentejo region offer, such as cheeses, wines, and various other superb things to try.

Aside from the food, the historic centre (much like in Lisbon) is rich with tiled facades and colourful buildings everywhere topped off with terracotta roofs and that signature deep-green coloured front doors!

We proceeded through the little streets and found ourselves with churches and cobbled high streets that gave us many beautiful backdrops for some of the great photos that they appear in.

While I have only been to Setúbal a handful of times, mostly filming, this time was quite special and pleasing to be able to share with you these photos that I feel came out well.

It was truly a pleasure to work with this couple and be trusted to be able to deliver on their two different sessions. Despite the mishap we had on our first session: being locked into a castle! I believe the outcome was indeed great and I look forward to hearing and seeing these pictures being printed. 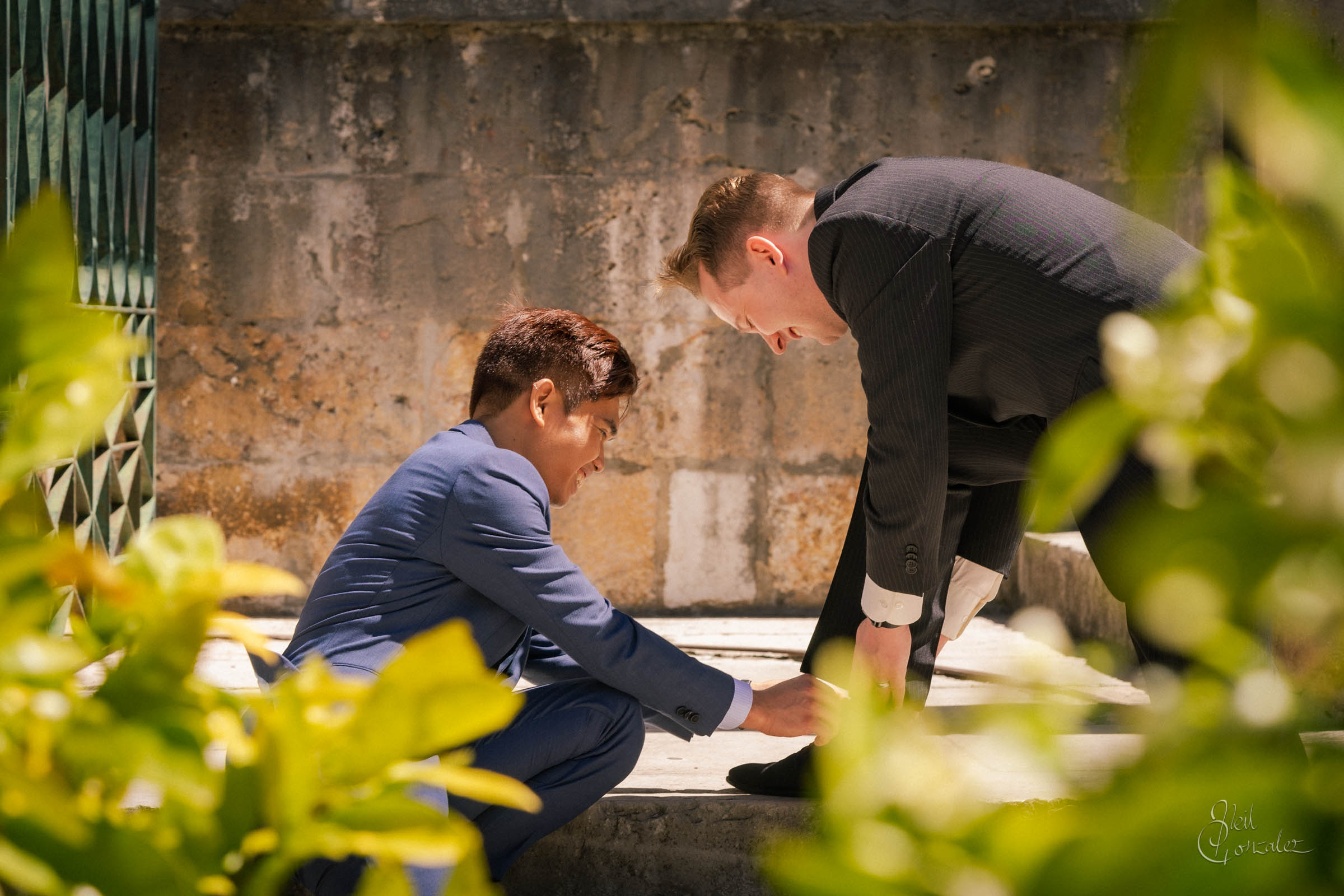 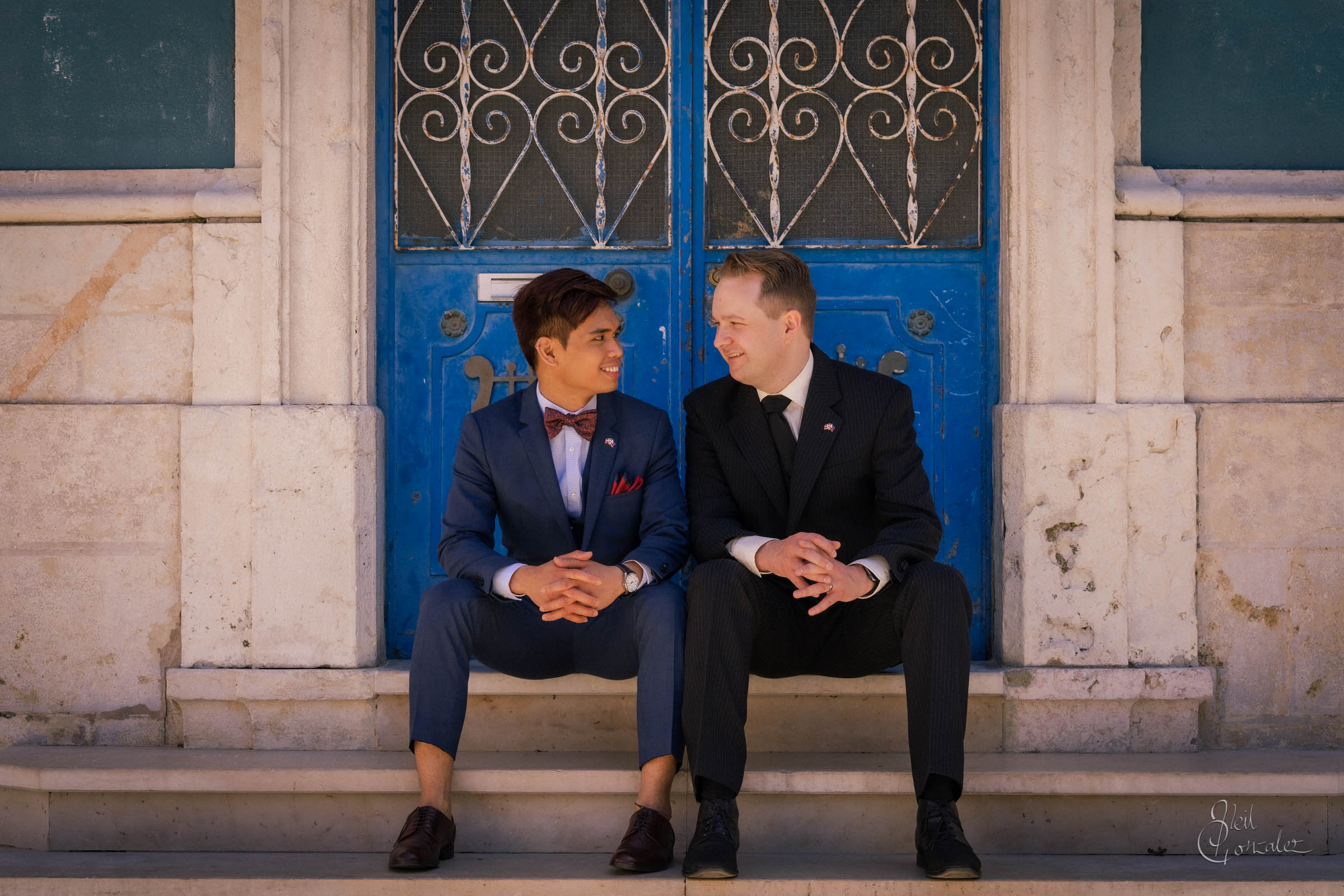 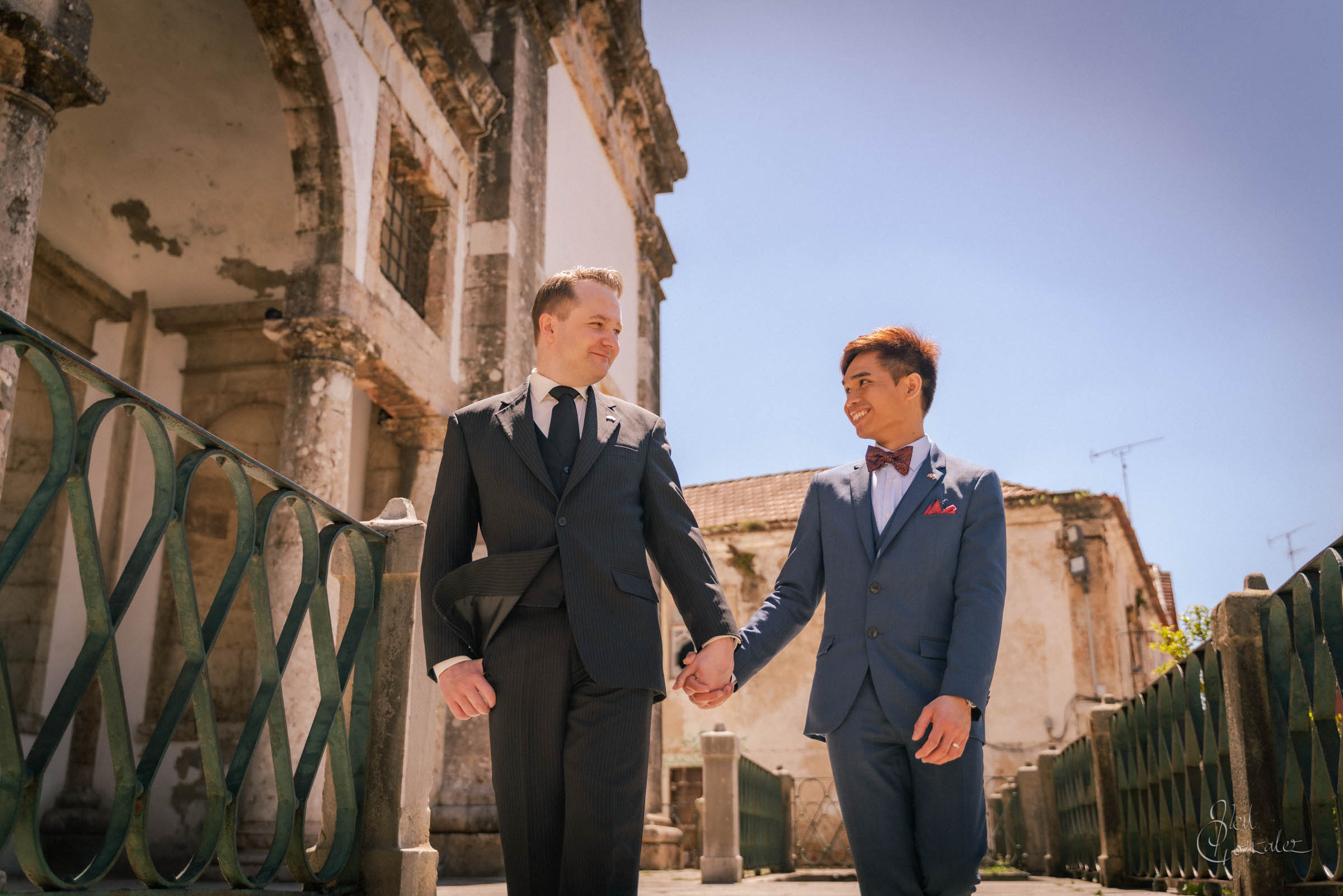 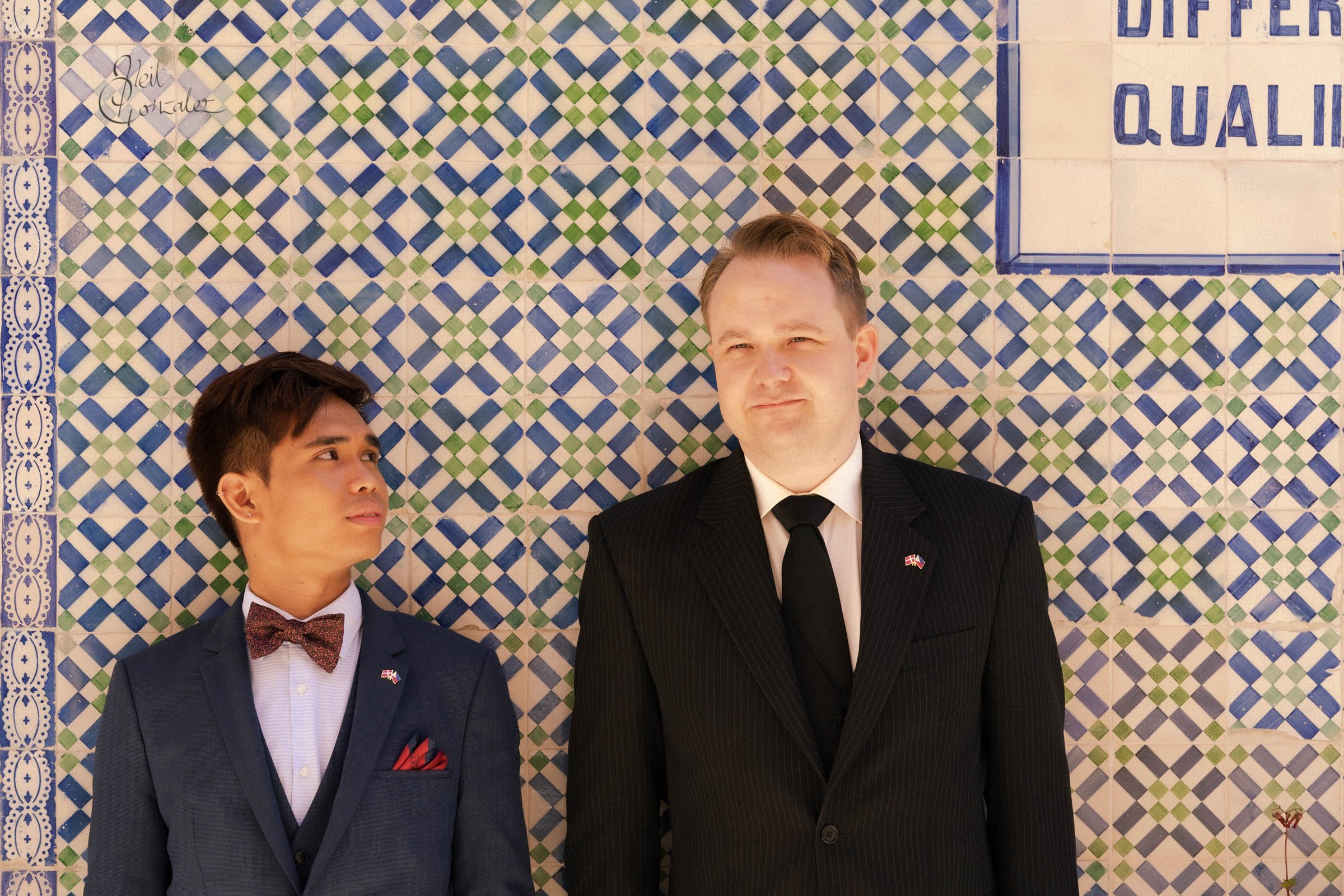